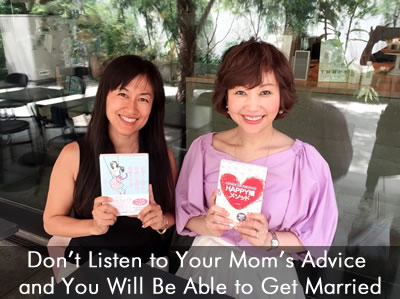 In Japan, I met the author, Keiko Taian. She wrote the book titled, “Don’t Listen to Your Mom’s Advice and You will Be able to Get Married”. She is also a matchmaker for Japanese men and women. 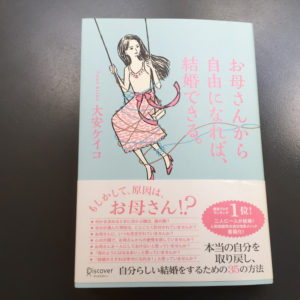 In the book she mentioned that many couples break up because he or she listens to his or her mom’s or dad’s opinions before deciding if his or her partner is right. If mom or dad says “NO!”, they will give up getting married although they love each other. Keiko specializes in matchmaking for Japanese men and women, but I have seen many similar cases with our international couples in the past 18 years.

In many cases of international marriage, Japanese women’s parents in Japan do not understand why their daughter wants to choose a non-Japanese man for marriage. The parents’ generation still dwells upon World War II and they never want to change their old way of thinking.

Here is my own personal story. When I left Japan to study in the US, my mom was crying a lot and tried to stop me from leaving. My father believed that his daughter was going to the enemy’s country. My parents are very conservative and they were afraid to accept anything different from the Japanese culture. On a positive note, now they are happy because they see that I am happy with my American husband and son.

Some Japanese parents are afraid of having mixed race grandchildren. They are concerned that their grandchildren may be prejudiced against if they go to Japanese school. In Japan, it may happen since Japan is still a mono racial society, and mixed raced children may be treated nicely or poorly in their community. However, things are improving in Japan. It’s interesting to note that recently there are many mixed race Japanese who are tv stars in Japan.

If you choose to live outside of Japan, it may not be a big problem since many western countries accept mixed race people. In many parts of the US and Europe mixed race people are seen as normal and it is often hard to tell the difference anyways. After all, the US is known as the melting pot. The world is getting more and more diverse and mixed race people are becoming the norm.

However, Japan lags behind the rest of the western world concerning mixed race couples. Some Japanese women still decide to choose to listen to their mom’s advice when choosing a husband. Unfortunately, I have seen some couples give up their relationship because of that.

As a matchmaker, I would like to say to Japanese women out loud, “IT’S YOUR LIFE, SO, MAKE YOUR OWN DECISION!!!”
I am going to recommend to all of our female clients to read Keiko’s book “Don’t Listen to Your Mom’s Advice and You Will Be Able to Get Married”.
And I strongly believe that it is up to each one of us to change the world for the better!

We have been working as professional Japanese matchmakers for 18 years.
We look forward to assisting you in finding your Japanese wife. Please click below to make an appointment for a Free Skype consultation if you are truly interested. We are happy to make an appointment with you after you have created your own profile.
https://meetjapanlady.com/company.html

Join us at our next event in Japan.
Pre-Registration
http://beret-ex.jp/fx/18