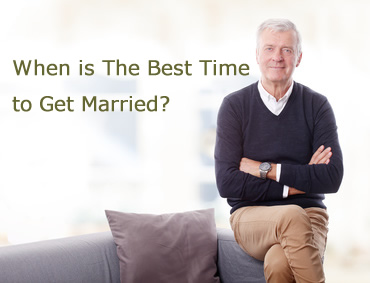 When is The Best Time to Get Married?

Recently, a former male member rejoined our service. During his first membership, it was 2006 and he was 43 years young. He wanted to have children and start his own family at that time. Somehow, he said, he was too busy to take action as a member. So, he gave up on his dream of getting married to a Japanese woman even though we provided him with many excellent opportunities.

Now it is ten years later, he is 53 years young, and he has rejoined our service as he still has his dream. He is still young and it is not too late to have children. However, he is not in the same age group that he used to be in since he is not the same age anymore.  So, it will be a little bit more challenging for him if he still wants to meet Japanese women who are their early 30’s in order to have children. The reason is that Japanese women who want to have children want to meet men younger than he is. It may take time if he waits for the opportunity to meet a young Japanese woman. It is not impossible, but it will not be so easy now since he is ten years older. Ten years ago it would have been easy for him to get married.

The trap that many people fall into is that they believe that, “I am too busy to take action.” Actually, you may never not be busy. So, by deciding not to take action on making their dreams come true they are delaying or sometimes ending the likelihood of their dreams from ever coming true.

So, our advice to you is this. If you really intend on making your dreams a reality, decide to do it today! And then take action every day to make it real and allow it to happen. The perfect time to get married is right now.  The hardest part for many people is simply deciding that they really want to achieve a goal. However, once one decides that one wants to achieve a goal and focuses one’s energy on that goal, it is actually easy to achieve that goal. The mind is really powerful and can achieve whatever it wants to achieve.
So, if you want to get married now, you need to make time for yourself NOW. It is not too late.

As a matchmaker, I want to encourage you to take action now.
We are always happy to assist you in finding your Japanese wife!